Various methods are used to describe the quality of a particular gemstone relative to other gemstones of the same type. There isn't any universally accepted grading system. Different dealers often use different methods and symbols to describe the grade of a gemstone. Many use "commercial", "good", "fine" and "extra fine" to describe the stones. You will also often see "AAA","AA","A","B" etc. Grading is always subjective but if done consistently and honestly it should help you compare different stones with different prices. The grade of a stone should take into consideration the color of the stone, the clarity and to a lesser extent, the cut.

Color is the most important consideration for colored gemstones. There are 3 factors affecting the color of a stone. They are Hue, Saturation, and Tone.

Hue is the color of the stone: red, yellow, blue, etc. Generally, the more pure colors are more desirable. For instance, a red ruby is better than a orangish-red ruby. But tastes and fashion trends vary and change. People in different countries and cultures often have different ideas about what color or shade is most desirable.

Saturation refers to the intensity of the color. Saturation is usually rated from 1 to 6, 1 being grayish or brownish and 6 being "vivid". Generally the more vivid color, the better .

Tone is how dark or light the looks. They are rated on a scale of 0 to 10 with colorless being 0 and so dark as to appear black being 10. The ideal tone is usually in the upper middle range but varies among different species of gemstone.

The clarity of a stone simply refers to how clear it is. The main factor here are inclusions. Inclusions are anything within the stone that interferes with the transmission of light through the stone. Inclusions can be small fractures within the stone, or tiny crystals of other minerals. In many cases there are actually tiny pockets of liquid or bubbles of gas trapped within the crystal structure of a gemstone. To the naked eye they just look like little specks or fine lines. Generally the more included a gemstone is, the less valuable. However there are exceptions and inclusions are more acceptable in some stones than others. For example, natural emeralds almost always have significant inclusions, so they are more accepted in an emerald than in, say amethyst which is commonly very clear.. The Gemological Institute of America has attempted to standardize clarity standards for Colored Gems. They have divided Gemstones into 3 types and have defined the clarity grades for each type.

You can see a chart describing the GIA clarity standards here.

The quality of the cut is also a factor in the grade of a gemstone. A well cut stone will reflect and refract light better and will be more appealing.

In later articles I will discuss each of these factors in more detail, but this gives you an overview of what factors are considered when grading a gemstone. 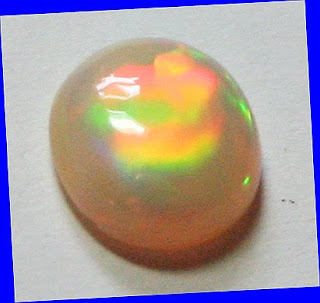 I wish pictures could convey how bright the color play is in this Ethiopian opal. I've done the best I could with my limited photographic skills. This is a 1.95ct. stone we recently had cut. It shows broad, bright bands of color in almost any light. Mostly red, green and yellow, but a little violet blue as well. The base is a light yellow color. A lot of the material coming out of the Welo area in Ethiopia is stunningly beautiful and seems stable. Some still have doubts about the stability of most of the opals coming out of Ethiopia, but some are starting to say that the opal from the Welo region may be more stable than Australian opal! Prices are still comparatively very low but that may change in time as more people see this African opal, more cutters learn to cut it properly and more trust is built in the marketplace. You can see more pictures of this opal as well as some Ethiopian opal rough on my website.
Posted by Brett at 2:22 PM No comments: