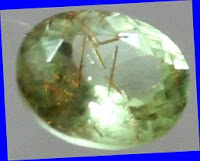 You may be familiar with the gemstone rutilated quartz. It is a fairly common stone that can be strikingly beautiful. It is clear quartz that has inclusions of rutile crystals within it. The rutile appears as long, thin, needle-like crystals that are black, gold or often reddish-brown in color. I have occasionally found a rutile inclusion here or there in other types of gems, but usually its just a couple of thin lines in the gemstone and is a detractor from the stones appeal rather than something that enhances its beauty and value. Recently though, I got some faceted grossular garnets from Africa. A couple of them were quite heavily included with rutile. Here's a picture of one. The garnet is a pale green color with a number of gold rutile crystals running through it at various angles. Its very interesting and I think, attractive! Garnets
Posted by Brett at 9:01 AM