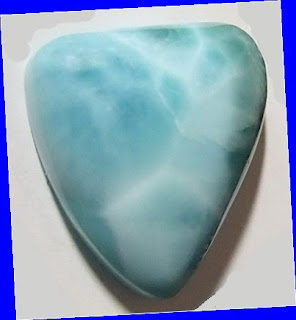 Larimar is usually cut into freeform cabochons. The rough is often somewhat crumbly and has some matrix and voids so there is a fair amount of waste when sawing and grinding. Therefore, it is often cut in free form shapes that preserve as much solid material as possible. Finished stones however, take a fine polish and their beauty is stunning. The hardness of Larimar ranges from 4 to 7 on the mohs scale with the darker blue stones usually being harder. So it is roughly the same hardness as turquoise (5-6). The blue color, not found in pectolites from any other location, is as a result of its containing Cobalt.
Larimar is usually set in silver, but sometimes gold. It is often used in much the same way as turquoise and occasionally it is even seen in contemporary Southwest
style jewelry. Larimar gemstones may be a little too soft for everyday wear as a ring but is very popular as a pendant stone or for earrings. Larger pieces make great wire wrap subjects. Larimar offers a shade of blue unavailable in other gemstone material and it adds a tropical feel to any jewelry design.
Posted by Brett at 9:08 PM